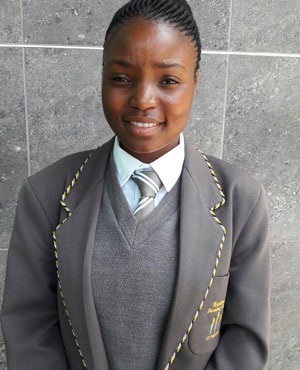 Mbali Shamu, 18, who lives in a 2 roomed shack in Sebokeng with her mother, sister and grandmother, passed with seven distinctions and wants to be an actuary to help SA boost its economy.

Pretoria - The department of social development is seeking to scrap the means test for social grant beneficiaries who qualify for National Student Financial Aid Scheme (NSFAS).

Social Development Minister Bathabile Dlamini, said although this policy reform was still in its infant stages, it was aimed at allowing academically eligible social grant beneficiaries not to undergo a double means test for financial eligibility.

In addition, the ministers said her department along with the department of basic education and the South Africa Social Security Agency (Sassa), had signed an agreement aimed at improving the well-being of a child by tracking the extent to which financially-strapped children were accessing social protection services from government.

“This is made possible by using the identity number as a unique variable to any administrative data and matching various data systems in order to determine the extent to which children access services and interventions that government provides,” she explained on Tuesday.

“In addition to the social assistance interventions, it is important that poor children are assisted to complete their basic schooling and funding their studies,’’ she said.

The department established an outreach project in October 2016 to reach a large number of poor and vulnerable matriuclants in a bid to assist them to apply for the NSFAS funding in the 2017 academic year.

Bridgette Masuku was one of the students who applied for funding.

Eighteen-year-old Masuku is one of four siblings in a family which has lost parents. She lives alone in a three-roomed shack, while her 10-year-old brother, is being cared for by their uncle.

She said her two older sisters live in their own homes, and that she has to take care of herself while she studies.

“I live alone. I cook for myself, clean up the house. I do everything. My mother passed away in 2007 when I was 8 years old and I don’t know my father. My grandmother is disabled, she is staying with her son, and there are children there, so then I decided to stay alone.”

Masuku obtained a Bachelor’s pass allowing her to study at any university in the country, but she said it was not easy to achieve these results.

“It was very difficult; I did not believe in myself, I thought I would fail.”

But, the motivation of improving her little brother’s living conditions kept her going, she said.

Masuku plans on studying Journalism at the Tshwane University of Technology in Pretoria.

Another learner who performed better than she had anticipated was 18-year-old Mbali Shamu. She obtained distinctions in all seven of her subjects.

“At first I didn’t believe it because I was only hoping for two or three distinctions. It came as a shock and a surprise, but I am really grateful.

“I come from a family of four. My mother is not working and my grandmother is a domestic worker. We survive with our social grants, so it wasn’t easy.”

Shamu, who lives in Eatonside, Sebokeng, south of Gauteng, said she had to travel about 10km to school.

She lives in a two-roomed shack with her family which often made it difficult to study.

“I have a 2-year-old sister and we have to share the space. You can imagine the four of us: My mom wanted to cook and I wanted to study, it was very difficult. But with the help from Isibindi and my mentor, I managed to pass and do well.”

Isibindi is the department's programme which helps Grade 12 learners who come from youth or child-headed households by relieving them from responsibilities by assigning child and youth care workers to help them with their school work at their 300 sites across the country.

Shamu said she lived in a neighbourhood known for its high levels of crime and high teenage pregnancy rates.

She had initially wanted to study medicine but has since changed her mind and decided to pursue actuarial science at the University of Witwatersrand.

“Actuaries use mathematics to predict future risk in the economy. So I would like to use my skills as an actuary to help develop the economy of the country so that it can compete better with the other countries.”